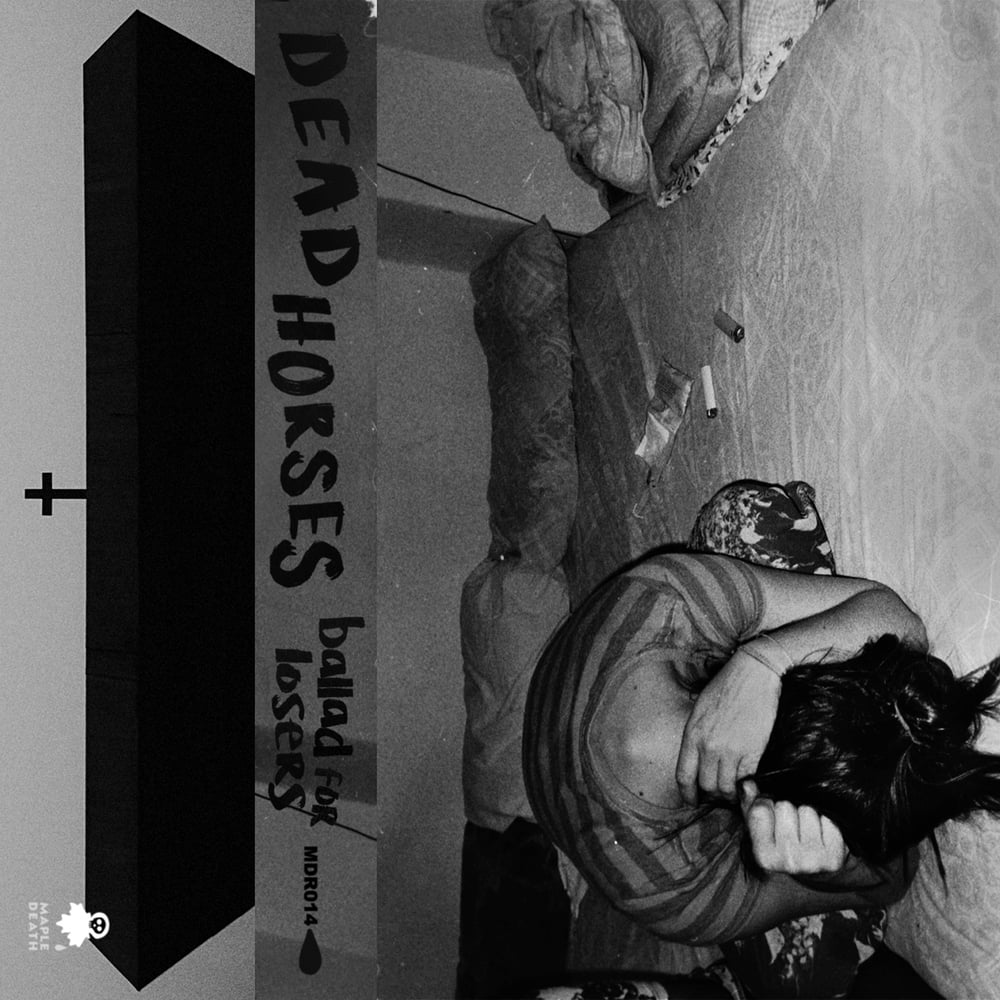 A friend of mine convinced me right off the bat with his elaborate theory, something in the heavy humid air of the Ferrara province makes everything slightly off, skies are wider, fog is thicker and an acid induced plethora of individuals walking sideways and sleeping vertically keep weaving deep oddball music. Weird Ferrara is what he calls it and nothing represents the spirit he was describing more than the city’s acoustic-punk trio Dead Horses.

Ballad For Losers, the aptly titled debut, is Dead Horses’ first release for Maple Death Records and it’s a unique rock’n’roll no frills document of one of Italy’s underground best kept secrets. Agnese, Zufux and Mauro already play together in the high volume dissonance masters For Food, a band that brings to mind the singular approach of Texas freaks the Butthole Surfers, but when they want to channel calmer pastures they write and record music as Dead Horses: an acoustic guitar, an electric guitar and a minimal drum kit, that’s all their hypnotic cowpunk songs need. Take ‘No Wahala’, a blues noise shuffle, where the magic can be found in the male/female harmonies chasing each other ever so gently before an anxiety freakout sonic assault lets you know exactly what primordial feeling you were looking for initially. ‘The Liar’, keeps you simmering, you’re a traitor picked apart by a sawing guitar that recalls John Cale’s work in VU’s White Light/White Heat, while the sun creeps through drying up the swamplands on ‘Morning Hell’, a pastoral pop number that channels Meat Puppets, Vaselines and maybe the right hint of Exene Cervenka. ‘Hobo Talks’ and ‘She Wishes’ are pure voodoobilly garage rave-ups conjuring Gun Glub nightmares and Grace Slick’s old amphetamines with a purpose; ‘Walkin By The Light’ is the reaper knocking tenderly at your door and whispering to you what your existence really is all about.

Dead Horses are lifers, they write, record and play to ease the pain: it’s all a delicate balance, music that is ready to crumble before your feet expressing exactly your inner ghosts, 8-hour shift and defeats while maintaining an obscure joyous mystical suspended force. I’m sold and if I’m smart I’ll keep drinking water from the same source these Horses call home for a long long time. Tell me where I have to go but don’t tell me how…

Recorded and produced on a 4 track by Dived. Photography by Zufux, artwork by Giulia Mazza. Limited edition hand-stamped “silver mirror” cassette tape with inlay printed on 180 g and download code