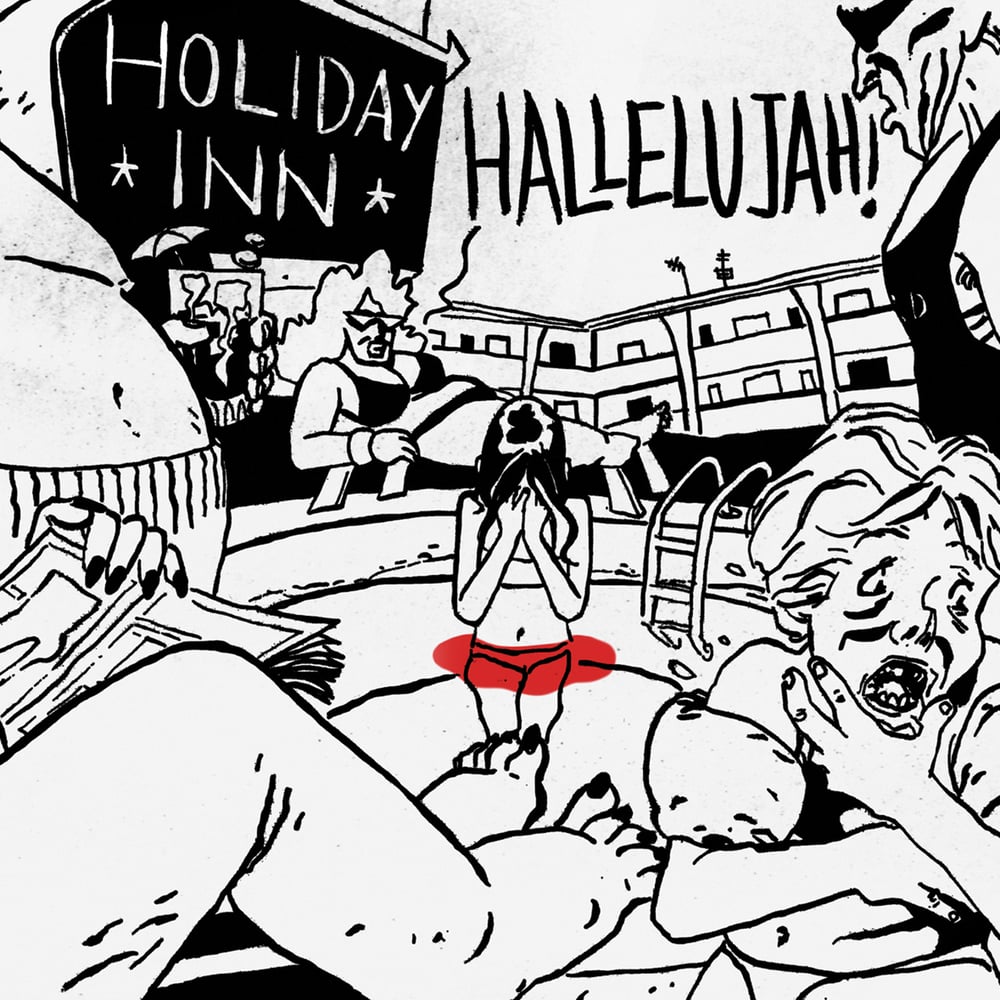 (Hallelujah! / Holiday Inn split 7” single is housed in a fold-over 170gram jacket, designed by illustrator Vic Sinex. Each copy is hand stamped with “pool blood” and comes with an ugly download code. To be played at 33rpm folks. Slow is better.)

Hallelujah! know the word abrasive inside out, they’ve been terrorizing crowds for over a year with their raw brand of noise punk and r’n’r. North Eastern Italy (Trento/Verona) has made this four piece fierce, irritating and ready to blow your face to the back of your skull. Terror At The Post Office and You Are The Champion are the band’s first recordings after their debut 12” EP came out in 2015 on Depression House Records and garnered praise from Maximum Rock’n’Roll, Noisey, Cvlt Nation and just about every ‘zine this side of the ocean. Two tracks that condense the feedback and utter degradation of bands like Brainbombs and Germs mixed with the brattyness of Electric Eels or Homostupids and the low-thud of AmpRep’s best freaks. It’s like a relentless kid, poking your eye for 4 minutes straight!

Holiday Inn are a duo from the east side of Roma and there is no better way of describing their sound than Acid Minimal Synth Punk from la capitale. They are a collaboration between Gabor (Aktion, Metro Crowd) on voice and Frenchman Bob Junior (Trans Upper Egypt, Bobsleigh Baby, Hiss) on synth and drum machine. Their live shows have elevated them to cult status amongst the picky Italian underground scene: Gabor is a lanky dude and struts onstage with a boxer’s pre match ritual dance, ready to vomit words in your face while Bob’s composure never fails to spread misery and mystery through his vintage noise assault setup. Mob Mob Mob is a five minute anti-mafia rant directly inspired by a demonstration held in Calabria where protesters brought music instruments to the streets. Holiday Inn are shaped and scarred by the unauthorized development of buildings once considered a sign of gleaming growth in the Roman suburbs. It’s nostalgic and nasty, and will not have a bright future.